– The fundamentals are there and we have the know-how. All we need is a bit of luck, said Professor Tomas Kåberger at EIT InnoEnergy, in his opening key-note at H2 Value Chain in Oslo.

The co-organizing partners of the H2 Value Chain Seminar.

While investors and industrial partners ready themselves for the beckoning Hydrogen-fueled renewable energy revolution that lies ahead, previously spun out high-tech ideas and solutions from leading-edge laboratories have arrived at market readiness and are preparing for commercial launch.

Judging by the examples given at the joint business seminar, there is no doubt that research-based innovations will enable and accelerate the hydrogen-fueled economies of Europe and Norway.

PowerCell Sweden AB, which was founded in 2008 as an industrial spin out from the Volvo Group, is a case in hand. As it starts to generate considerable interest from customers and investors alike, the company representative nevertheless highlights a desire for continuous and pro-active collaboration to maintain speed.

Meanwhile in Norway, ZEG Power AS, was established in 2008 as a Joint Venture between the Norwegian Institute for Energy Technology (IFE), one of the world’s foremost research communities on energy, and Christian Michelsen Research AS (CMR). ZEG Power is positioning itself to become a technology provider for large-scale plants, and an equipment provider for small-scale plants, for production of hydrogen and/or electrical power from hydrocarbon gases with integrated CO2 capture, based on the patented ZEG-technology – Zero Emission Gas.

Together with Coast Center Base (CCB), ZEG Power has agreed to initiate a collaboration to map opportunities related to large-scale hydrogen production at the Kollsnes natural gas park (Naturgassparken ved Kollsnes). Based on cutting-edge Norwegian technology with built-in carbon capture, right at the planned CO2 disposal and storage site “Northern Lights”, the technology enables compact, cost-effective reforming of carbonaceous gas to hydrogen with integrated CO2 capture and storage.

For the Good of Mankind

CEO of EIT InnoEnergy Benelux, Jacob Ruiter, points out a necessity to remain open-minded and support several technology tracks simultaneously to succeed with the transition towards accelerated deployment of renewable energy. EIT InnoEnergy has to date invested in more than 300 start-ups and scale-ups that all contribute to the energy transition of the world. EIT InnoEnergy’s portfolio of sustainable energy technology assets includes Danish Hymeth, and Skeleton Technologies the global technology leader in ultra-capacitator energy storage for automotive, transportation, grid and industrial applications with production facilities in Germany.

Quoting Sam Eyde, the founder of Norsk Hydro, NEL’s Director of Marketing and International Relations Bjørn Simonsen made the case for using natural resources for the good of mankind. This perspective is very much in line with the vision of the new European Commission: a sustainable, fair and prosperous EU.

– Hydrogen is energy in its purest form. Use the energy when it’s there, or store it if you can, said Simonsen.

Hydrogen can be used in all areas where natural gas is used today, and several countries and organizations are preparing for the hydrogen economy, all the more so given the fact that clean hydrogen has been identified as a priority area in the European Green Deal.

Nils Røkke, Chairman of the European Energy Research Alliance, discussed the European push for investing in sustainable innovation. The CO2 emissions in Europe decreased by 23% from 1990 to 2018. During the same period, the European economy grew.

According to Anne Mette Hilmen, Deputy Director General at the Norwegian Ministry of Petroleum and Energy (OED), Norway has frequent dialogues with other countries and the EU.

– It’s unbelievable how many initiatives that are emerging on hydrogen.

She highlighted some of the Norwegian hydrogen initiatives, covering the transformation of industry and possible business opportunities in the maritime sector, among others the NORLED hydrogen ferry which is to be operational by 2021, combining battery and liquid hydrogen. Meanwhile, the express boat tenders in the counties of Trøndelag and Vestland is clearing the path for development of the world’s first zero emission express boats.

A status report on the forthcoming Norwegian national hydrogen strategy was expected during the seminar. However, the Ministry of Petroleum and Energy was unable to provide more specific information on the content, nor a projected date of release at this point.

– The Norwegian national hydrogen strategy is a much-anticipated policy signal. Many of the participants pointed out that the strategy is overdue, says Thomas Bjørdal, Project Manager at the Norwegian Renewable Energy Cluster (Fornybarklyngen).

– There is, and has been for a long time, a need for a clear and consistent national hydrogen strategy. We hope that the delay is caused by a thorough and comprehensive work worth waiting for, says Bjørdal. 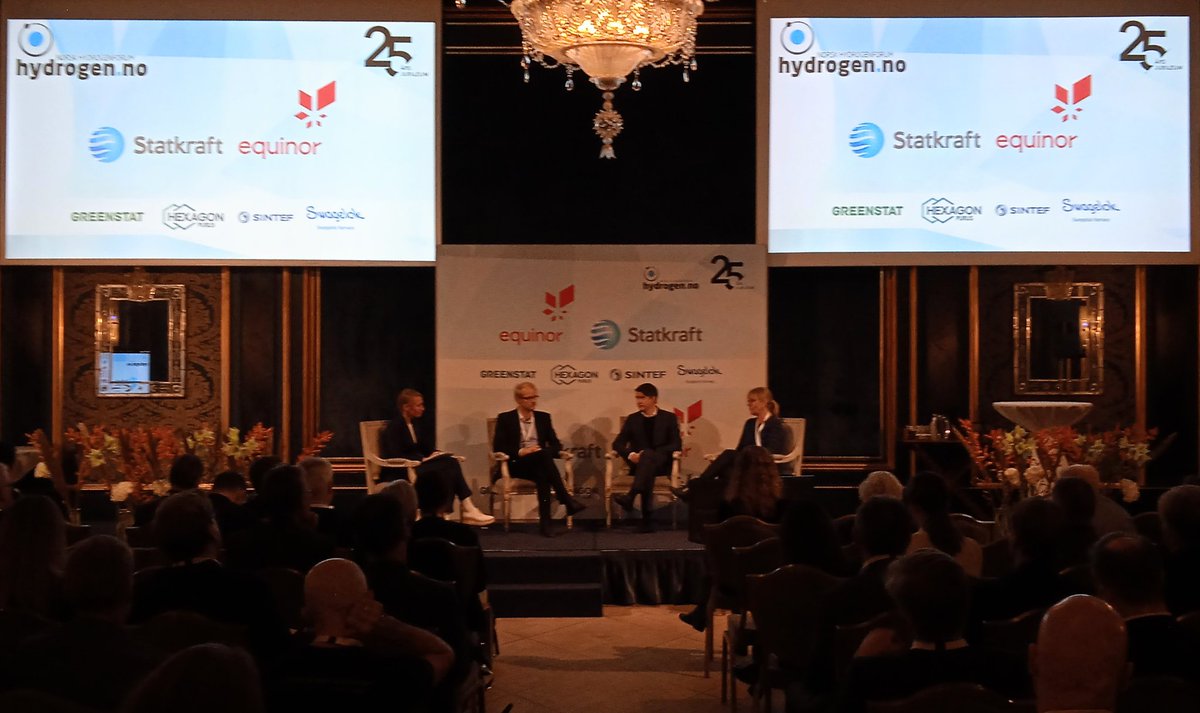